When people think of Jaguar competition cars of the 1950s they usually think of C Types, D Types and XKs but the works team of large saloons was equally successful on the Monte Carlo Rally. Most of the team was made up of talented Irish amateurs and here we present some remisicences from the late Arthur Jolley a leading Southern Irish team member.

In the 1950s the rally involved over 300 competitors starting at various points around Europe and following ‘concentration’ routes of around 2,000 miles to bring them to Chambery in Southern France. An average speed of 50 kmh had to be maintained

throughout with competitors risking delays caused by anything from snowstorms and fog to time consuming champagne receptions depending on their starting city. A police escort for each of the leading cars hastened their progress through London and Paris but advice from locals on potential short cuts could be a mixed blessing. The cars had to maintain the same average speeds over loose surface roads across the alps before raching Monaco. There the leading 100 cars took part in a handicap time trial around the grand prix course and further navigation and breaking tests over the Col de Turini and other mountain passes to decide the final results.

In 1951 Dublin furrier Cecil Vard borrowed ZE 7445, his mother in law’s 3.5litre Mk V saloon to enter the rally. The Mk V combined the torque of the 3.5litre SS 100 engine, the fine handling independent front suspension of the XK 120 and the comfort of a large saloon body. The car 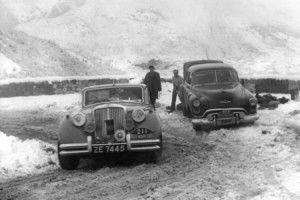 was assembled by Cavey’s in Dublin and was standard apart from extra spotlights, demisters and a small tricolour on the grille! It was checked over by Maurice Cavey before the event – he also took part in Norrie Bailey’s 2.5litre Mk V, ZJ 8726. The strict average speed requirement meant that there was little, if any time, for rest stops so many crews were comprised of three or more with the extra members giving the others an occasional break or just helping push the car out of a snowdrift if required.  Cecil took advantage of the Jaguar’s size to 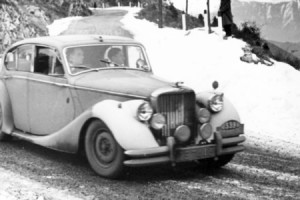 bring along Bill Young as relief driver, the experienced timekeeper, Doc Jackson and enthusiastic motor cyclist Arthur Jolley as navigators. They astonished everyone by finishing in 3rd place overall behind the hugely experienced Jean Trevoux in a Delahaye and the Comte de Monte Real in a V8 Ford . They also received a trophy for the highest placed British car but the Irish newspapers were quick to point out the cars Irish assembly and its large number of local compontents.

For 1952 rally Vard was offered the loan of a 2.6 litre Lagonda from Black Bull Engineering, the I 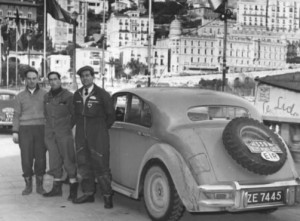 rish importer. However it proved troublesome so he reverted to Mrs O’Connor Cox’s Jaguar for 1953 with the car being checked over in Browns Lane en route to the start. Cecil and Arthur were joined by Frank Bigger, the Sales Manager in Caveys who was an experienced racing driver and excellent mechanic. Although a private entry they formed a one make Jaguar team with Ian and Pat  Appleyard and  Don ‘Pathfinder’ Bennett in Mk VIIs, two of which had featured in the top 10 the previous year.

As well as the usual extras, Cecil claimed to have fitted an extra windscreen washer tank 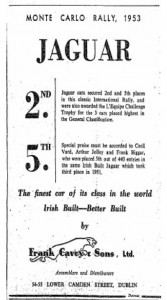 filled with salt water to combat the screen icing up. The rally attracted a record 440 entries and unusually fine January weather meant that 356 made it to Monte Carlo. Results were then decided by a 74km navigation test in the mountains of Col de Braus and a series of 250m acceleration and braking tests around Monaco. The Appleyards finished a single point behind eventual winner Maurice Gatsonides, the Belgian inventor of the ‘Gatso’ camera. The Irish built MkV was another two points down in 5th, just ahead of Stirling Moss in a Sunbeam Talbot. With Air Vice Marshal Bennet’s car in 8th, the three Jaguars won a l’equipe team award for the first time. In 15th place were well known Northern Irish race and rally drivers Ronnie Adams and Ernest McMillan in the former’s own MK VII, OZ9499. The Ulsterman had entered his Humber Super Snipe in 1952 but he declared that the Jaguar was a much better car all round and, at £650, it was just over half the price of the Humber. 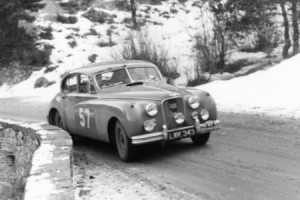 car being prepared by Browns Lane. With the more modern 3.4litre XK engine the Mk VII had even more power and torque than the Mk V. The works cars had blue printed engines and revised gear ratios and were capable of  60mph in second and over 115mph flat out. The Southern crew had LWK 343 used by Stirling Moss in British Touring Car racing. Moss praised its handling, road holding and ease of driving. In both Mk V and MK VII the combination of Grace, Pace and Space proved ideal for marathon rallies and, with over 20 cars entered, 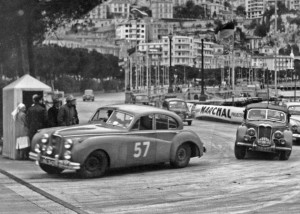 they dominated the large saloon class. The factory were now taking a closer interest in the event and Lofty England arranged a telephone connection from the finish to the start of the Col de Leques test so he could advise his cars on the optimum average speeds to aim for. The Irish crews finished in 6th and 8th  with Adams winning the ‘Challenge de la Ville De Monaco’  award for best performance in the high speed regularity test round the GP circuit as well as two other trophies.

With exceptionally bad weather predicted from the Glasgow start, Adams decided to take his car to Belfast for a week beforehand to personally supervise the fitting of extra lights and demisters. Cecil Vard’s crew collected their car directly from Coventry on the way to Scotland but he claimed to have brought a specially made fox fur sleeping bag in preparation for the sub-zero temperatures! As well as the icy roads many crews were caught exceeding the maximum average speed at the end of a main road near Grenoble. The Appleyards were in sight of victory when his Mk VII, SUM 7 blew a core plug sending a cloud of steam 100 feet up into the mountains. Vard also finished down the order in 27th, but Ronnie Adams, Ernest Mc Millan and Johnny Johns 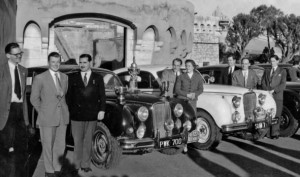 tone came in 8th overall and, with all manufacturers’  teams hit by difficulties the Faroux team award was again Jaguars’s. With the award came the offer of a works XK 140 for Cecil and Arthur to drive in the Alpine Rally later in the year. However with the horrific crash in Le Mans that year the Alpine Rally was cancelled, and with the death of John Lyons at the same time, Jaguar decided to wind down its involvement in motorsport.

1956 was to be the last appearance of the works team. Arthur and Cecil were joined in 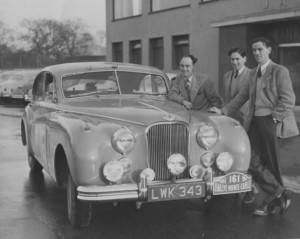 LWK 343 by the experienced Jimmy Millard while Frank Bigger joined Ronnie Adams and Derek Johnston in PWK 700 at the Glasgow start. Cecil and Jimmy were enjoying their breakfast when Arthur Jolley rushed out to start the car with only 3 minutes to go before their scheduled departure time. There were icy roads down to the first checkpoint south of Carlisle but then cleared giving an easy run through England and France. Disaster struck the Vard car when it was hit by another vehicle and the delays required to repair it cost them hundred of penalties. The Adams team had better luck, reaching Monte Carlo without any penalty despite an oil leak and ‘plot and bash’ navigation from Reims onwards. 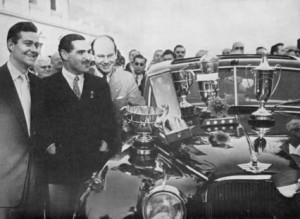 Only dropping a second to the fastest Porsche on the half mile braking test, they were in the lead on the last day. The final test was a on a demanding 250 mile course through the mountains and over the rain swept Col de Turini with strict minimum and maximum speeds to be observed. When the results were announced that night they were confirmed as winners with a 3 point lead over the second placed Mercedes.  The team received no less than 5 trophies and £1,200 in prize money from Prince Rainier the following day and they started a week of press and radio interviews and even a television appearance en route home.

Even with the great publicity Jaguar refused to change their mind about ending full works involvement in rallying. Ronnie Adams became a Rootes works driver campaigning Sunbeam Rapiers and also competing in events as diverse as the Mille Miglia and the East 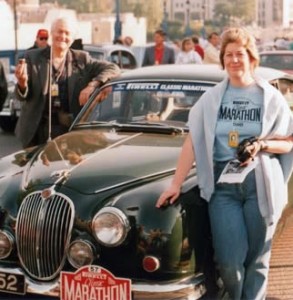 African Safari Rally.  Frank Bigger continued rallying for another few years but increasingly turned to his other interest, flying. In 1989, shortly before he passed away, he took part in the Pirelli Classic Marathon in a Jaguar MkII with his daughter JoAnn.
Cecil Vard entered the Monte for a few more years in Simca’s entered by Mc Cairns Motors but the cars were never strong or powerful enough to keep up with the works supported entries. Deciding to concentrate on rallying and autotesting within Ireland he enjoyed great success in both up to the early 1970’s. Before passing away in 1987 Cecil built up a large clothing business and did much charitable work with the Dublin Lions Club. When Cecil 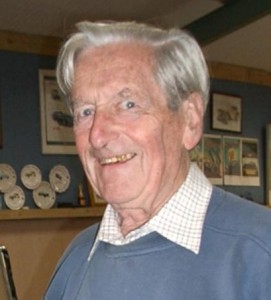 decided to focus on Irish rallies Arthur Jolley returned to riding in motor cycle trials where he was on the DU team that won the team award on the grueling Scottish Six Day Trial in the mid 1960’s.
Having held senior positions in the MCUI and DUMC&LCC, Arthur was a regular attendee at vintage car and motorcycle events well into his nineties. The last surviving Irish Jaguar works rally team member, Arthur passed away peacefully in May 2020, greatly missed by his many friends in motorsport.